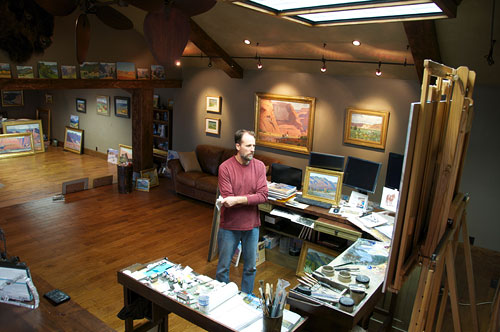 Born in Cedar City, Utah, Russell was heavily influenced to paint by his father–an accomplished painter and artist in his own right, who spent most of his career as a graphic illustrator for the federal government. In High School and throughout Russells years of formal studies, his audience of influence grew. At Snow College, in rural Central Utah, Osral Allred and Carle Purcell helped guide his brush forward as he continued in study at Utah State University, beginning in the 80s. Professors Harrison Groutage, Everett Thorpe, Gaell Lindstrom, Moishe Smith and Glenn Edwards powered the art department by their classical passion for art, fueling Russells passion and confidence that would later outway the risks of pursuing painting full-time.

It was from there that Russell made his living as a watercolor artist. Nearly thirty years later in 1999 he transitioned into oil paints that would prove to accelerate his career and the demand for his work.

Case paints directly from the created landscape, trying to record color and light. And his studio compositions are derived from thoughts recorded outdoors. The philosophy of his work leans to that of Robert Henri–to paint the emotions and the inner poetry of the subject, not to merely be bound by literal translations. Russell tries to record with direct strokes, the composition, color and emotion that he finds.

The mountains, canyons, clouds, and deserts have been there long before any of the artists. I am always reminded, while trying to give justice to what I see in front of me with my paints, that I am merely an observer, a looker, a sojourner being shown something much too lovely to fully comprehend. I have come to realize the simple joy of time spent combining elements that reflect a visible world that is reflecting a Divine nature.

Russell resides in Northern Utah with his wife of 37 years, Susanne, and son Cooper. He has been blessed to witness the union of both his daughters, Taylee and Morgan, to men of faith, Nick and Dane. And what joy has been found for Case to be blessed with five grandchildren; Afton, Samuel, Jacob, Henry and Peter.

For what reason do I long to reflect the lovely things I see? Compositions to be thought-up in a human mind; endless options of color cords to arrange and the fascinating nuances that exist in a single passing cloud.
– G. Russell Case

Today, Russell’s work is represented in galleries including in Jackson, WY; in Salt Lake City, UT; in Mt. Carmel, UT; in Santa Fe, NM; in Scottsdale, AZ, in Ketchum, ID; in Culver City, CA; in Bend, OR; and Crested Butte, CO. Case has also won numerous awards including Best of Show and First Place Oil Painting, Phippen Western Art Show in Prescott, Arizona in 2001; First Place at Southwest Magazine Artist to Watch Show in Steam Boat Springs, Colorado in 2002; Best of Show, People’s Choice, and Artist’s Choice, Maynard Dixon Country, Mt. Carmel Junction, Utah in 2003; 2004 brought him the Golden Thunderbird Award for Best of Show at the Maynard Dixon Country exhibition. In 2005 Russell won the Edith Hamlin award at the Maynard Dixon Country. Coors Show featured artist 2010; and 2010 Dixie Invitational 3rd Place Oil. In 2012 he was awarded Best of Show at the Coors Western Art Exhibition & Sale. Russell received Artist Choice award at the Coors Show 2015. At the Masters of the American West 2019 Russell won one of Montgomery Frames award. National shows Case is in are the Prix de West in Oklahoma City, OK; Western Visions shows in Jackson, WY; Quest for the West, Indianapolis, IN; and Masters of the American West, Los Angeles, CA. 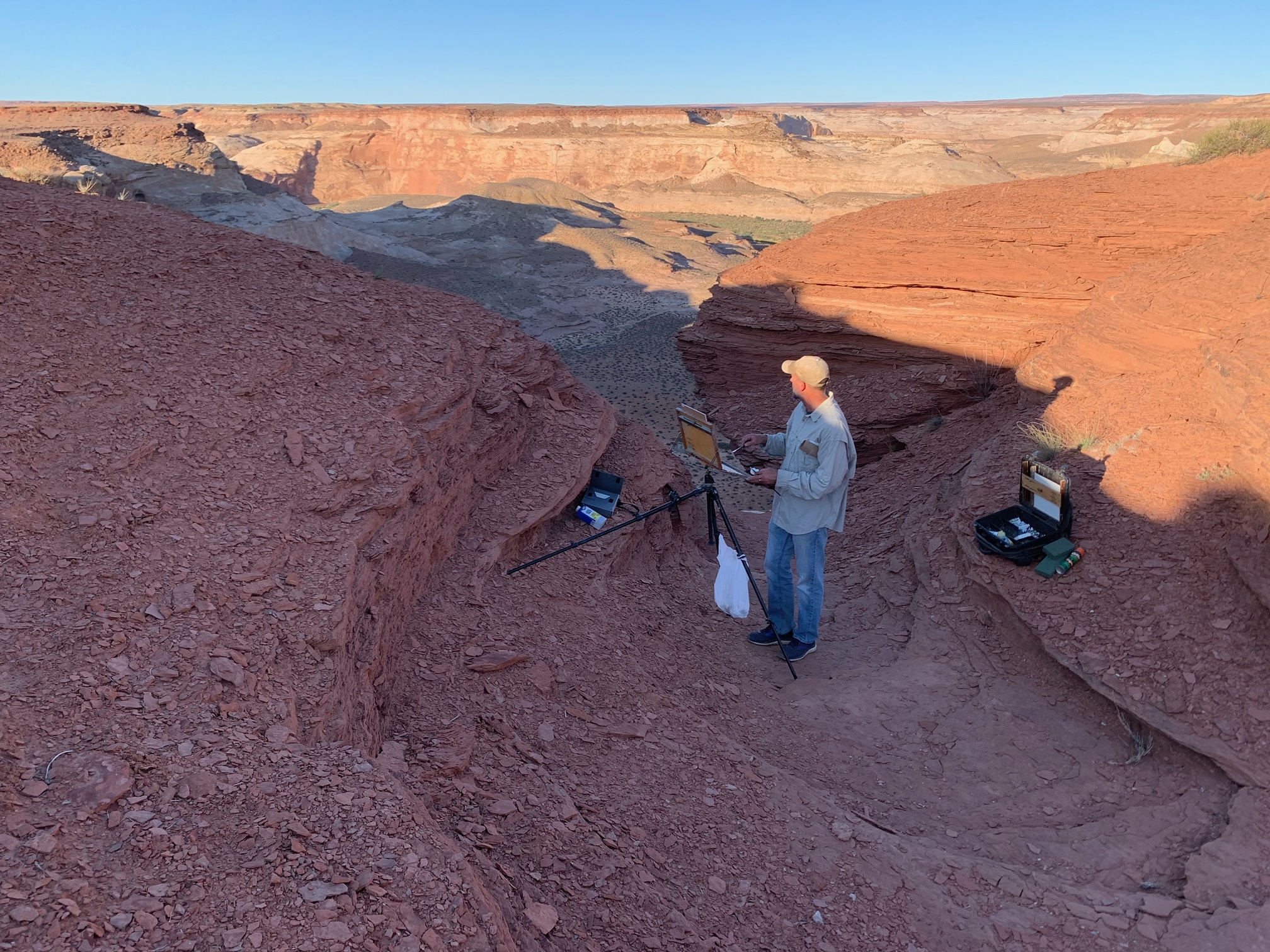